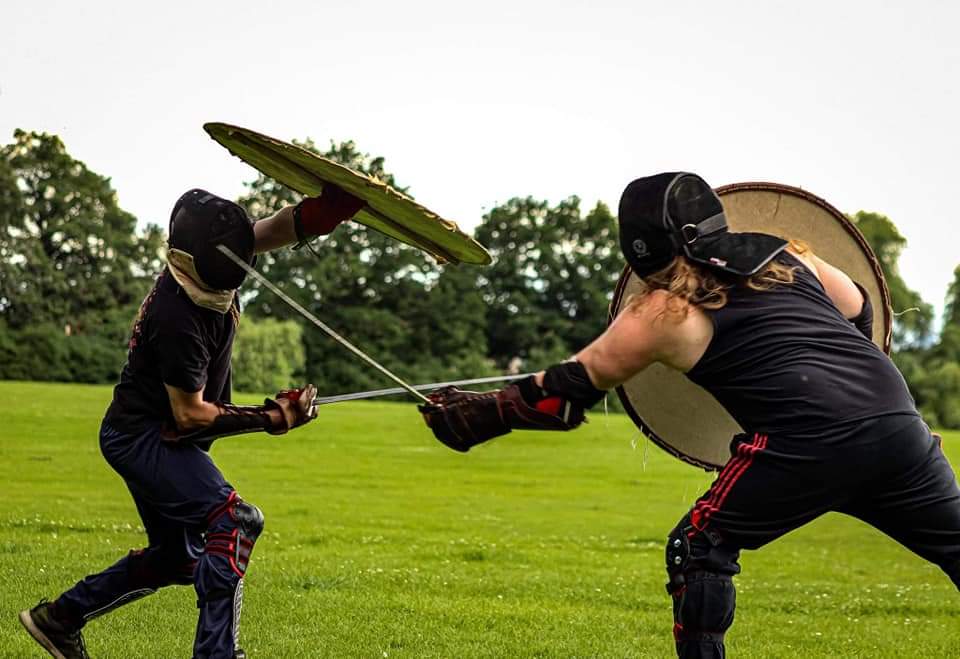 Fighting within The Ulflag Viking Reenactment is taught using the Ninheim system, which was formerly known as the JomsViking Steel combat system. This is non-choreographed, real-time sparring using steel weapons (rebated, rounded edges) and, as such, regular training is required to ensure the safety and skill of the fighters / combatants. Emphasis is placed on proper form, body mechanics, spatial / situational awareness, and footwork. Training is carried out in structured sessions, in comfortable everyday clothing, with necessary protective gear.

Viking Re-enactment across the world utilises different systems and martial art schools, much like today with Judo, Jujitsu, Brazilian Jujitsu, Karate, Kung Fu, and countless others. Our Viking re-enactment utilises the Ninheim system, pioneered and created by Qanun, utilising the knowledge of our forefathers Ulf-Eirik, Mike Haywood and those before (The Jomsviking Fight system).

As with any type of competitive sport fencing (HEMA / Steel mixed martial arts) there are reasonable boundaries set to ensure combatant safety. There are four such rulesets used within the Ulflag system, each with limits tailored to the objective of the style. The Ninheim system teaches how to encompass all of them into your fight style and encourages safety, while maximising your potential to be fluent in all the main competitive re-enactment styles world wide.

The main fight systems we utilise:

Eastern style combat, like Western, is tailored to European re-enactment events, but those that take place across eastern and western europe, such as Wolin. Eastern style fighting represents a slight, but significant, expansion upon the boundaries laid out for Western style. In Eastern style combat, blows are full-strength, and strikes are allowed to the crown of the head (face, neck, and side of head are still disallowed out of safety concerns). As would be expected, some form of body protection and a helmet are required for sparring under the Eastern ruleset. This rule set has grown much more popular over the past ten years across Europe, and now encapsulates the main / major style performed across Europe. The Eastern rule set used today, was pioneered by one of the founding fathers and first fighters in creating the Wolin fight system, Igor Gorewicz. Igor describes the Wolin system as taking the core principles of Eastern, and adding the positive elements of western to create a more natural and coherent fight system which can display the brutality of viking age combat, but still within strong safety perameters.

Western style combat is tailored to the safety regulations instituted at many of the large re-enactment events that take place in Western Europe, such as at Moesgård and Trelleborg (Denmark). With hundreds of fighters on the field at once, safety is of the utmost concern at these types of events, and so valid targets are limited to those areas of the body least likely to cause serious injury. Under this ruleset, strikes to the head and neck area, hands, feet, and lower legs are not allowed, with valid target areas being above the knees (including the groin), torso (minus direct blows to the spine), shoulders, and—depending on the event—sometimes the upper arms.

Strikes are expected to be clean and decisive, but not forceful. Fighters train proper body mechanics for pulling blows and applying the proper amount of force for the style—blows should be strong enough that they are felt in the heat of combat, but not so strong as to cause injury.

Huscarl / Full Target combat was started in 2000 and has evolved to encapsulate many events utilising a similar rule set, namely Neustadt Glewe (and such). The goal of Huscarl is understanding how to move effectively in a realistic, armed fight, and to better understand the use of the weapon. It is for people who want to learn more about fighting skills, and attempt to get closer to the truth of combat, something Ninheim encapsulates in its teachings as a base principle.

Under the Huscarl ruleset, all targets (including the face) are valid and any strike that would realistically end combat (such as decisive strikes to hands or feet) will end the match. Huscarl fighting has much in common with HEMA style fighting (though there is no surviving treatise from the Viking Age, inspiration and information can still be had from slightly later treatises such as the MS I.33), and ULFLAG members occasionally compete in HEMA tournaments. When engaging in Huscarl sparring, a HEMA mask and proper protection is required, or similarly, an Eastern Helmet with the proper protections utilised.

Wikipedia has this to say about our fighting styles, which some describe as a sub-section of the umbrella term HEMA:

While there is limited surviving documentation of the martial arts of classical antiquity (such as Greek wrestling or gladiatorial combat), surviving dedicated technical treatises or martial arts manuals date to the Late Middle Ages and the early modern period. For this reason, the focus of HEMA is de facto on the period of the half-millennium of ca. 1300 to 1800, with a German and an Italian school flowering in the Late Middle Ages and the Renaissance (14th to 16th centuries), followed by Spanish, Portuguese, French, English, and Scottish schools of fencing in the modern period (17th and 18th centuries). Arts of the 19th century such as classical fencing, and even early hybrid styles such as Bartitsu may also be included in the term HEMA in a wider sense, as may traditional or folkloristic styles attested in the 19th and early 20th centuries, including forms of folk wrestling and traditional stick-fighting methods.

The term Western martial arts (WMA) is sometimes used in the United States and in a wider sense including modern and traditional disciplines. During the Late Middle Ages, the longsword had a position of honour among these disciplines, and sometimes historical European swordsmanship (HES) is used to refer to swordsmanship techniques specifically.

Modern reconstructions of some of these arts arose from the 1890s and have been practiced systematically since the 1990s.”

Put your Back Into the Oar!