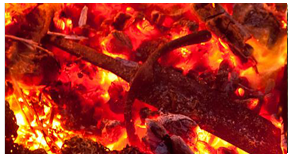 In June 2013, the Brotherhood of Jomsborg together with friends from close and distant shores have come together in Wolin (Poland), to the home of the Jomsviking to present their farewell wishes to Ulf Eirik. Ulf Eirik was the first Jarl of Jomsborg and one of the founders of the era of the modern viking on a global scale. The send off ceremony saw brothers from Texas, Canada, Germany, france, Poland, Sweden, England, Russia and other lands come together to awaken the slumbering Norse Gods so that the fallen Jarl could cross Bifrost and enter Odin’s hall. A formal Norse and Slavic ceremony took place with and several offerings and sacrifices being made followed by the burning of a longship.

This surreal moment will stay forever engraved in the memories of those in attendance despite the heavy partying and reveling that ensued. Later in the night, a heavy thunderstorm roared and rain poured as the Gods were raging with anger at the Norns for their mischievous weaving and cried for they had not seen such a worthy man, entering Valhalla for a thousand years. When dawn came and the fire grew cold, the ashes were gathered and burried beneath a rune stone specially carved in remembrance of the formidable character Ulf Eirik had been.

Viking Re-enactment combat of the 21st century and how The Ulflag fight.